Creating transparency through education about death, dying and the normalisation of mortality can help bridge generational gaps and help families to fear less and make more informed decisions when talking about end of life.

If you’re anything like the majority of people living in the Western world, chances are you haven’t given much thought to how you’d like to die. Or even spoken much about the topic in general.

Although we all know it’s going to happen, dying remains one of those things people still don’t want to discuss. And in a culture that embraces and celebrates youth, very few in the West want to face up to their mortality or risk being seen as macabre or morbid.

But with an ageing population and the UK’s NHS struggling to cope with demand, people need to start planning for their own end of life care earlier. Perhaps, then, the UK should follow Australia’s thinking and start getting dying on the agenda early – by teaching kids about it in school.

The Australian Medical Association Queensland has proposed that death should be built into the school curriculum. If this proposal is accepted, Australia will lead many developed Western nations in tackling the public discomfort and avoidance of death.

How people, especially the young, understand death is often heavily influenced by films and TV where it is often scarier than the reality. To try and address this issue and get people talking about death before it’s too late, Australian doctors are keen to see the subject taught in classrooms. They argue that death would be less traumatic and people would be able to make more informed decisions if palliative care and euthanasia were spoken about more openly.

In practical terms, schools could easily build death into existing subjects. In biology, for example, the processes of death and dying could be covered from a practical perspective, while in citizenship, students could learn how to draw up a will and look at the legal and ethical debates over what mental and physical capacity means.

A variety of organisations and lobbying groups are already making headway in getting people to talk more openly about death. The death cafe movement has encouraged people to talk about death and dying over tea and cake in 56 countries. The Order of the Good Death, led by mortician, author and founder Caitlin Doughty, takes an online approach to promote the idea of making death part of life. Meanwhile, the annual UK Dying Matters Awareness Week provides a programme of events supporting the vision that dying does matter and needs to be talked about. 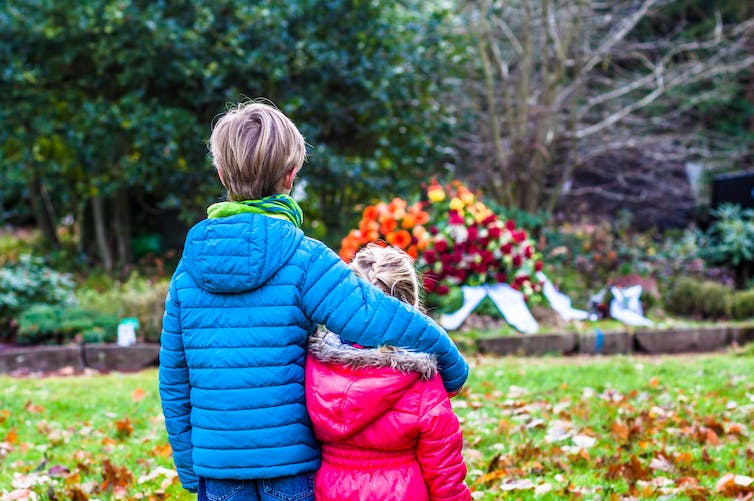 Children begin to grasp death’s finality around the age of four. Shutterstock

Such movements are making important inroads into challenging the public wisdom that “death is taboo”. But there remains a significant proportion of people who do not want to talk about death. It is this cultural trend that embodies what death scholars refer to as “death denial”.

A key problem with death denial is that individual wishes for end of life care are not considered until late on. And the result is that people struggle to achieve a good death, and often don’t have their wishes considered.

Educating the young about death and dying, then, offers the opportunity to challenge the unwanted consequences of not talking – which, according to the Dying Matters coalition, includes the family not knowing how to best help or support their dying loved one, the dying person feeling frightened and distressed, and the issue of people dying without a will – leaving the family unsure about funeral wishes.

New efforts need to be made to demystify death and dying. And there’s more to it than simply getting people to talk about death – although this is a positive step. Directly educating the younger generation is an important shift towards empowering people to understand the interplay between law, medicine and ethical issues surrounding death and dying.

By creating transparency through education, death, dying and the disposal of the dead can all become part of the everyday. And by normalising death within schools, it may well be that students can help their families to fear less and make more informed decisions about the end of their lives.